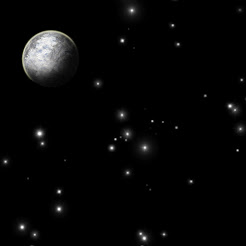 Pluto is a distant alien world of ice and dust, drifting 3.2812 billion miles from our own homeworld. It is smaller than that of our own moon (1079.6K miles in radius compared to Pluto’s radius of 738.38 miles) yet it contains wonders which we could scarce imagine.

This dwarf planet is part of the Kuiper Belt, a belt of galactic ice bodies which orbit around Neptune. Pluto, though small, has five moons of its own that follow its dance through the Galaxy. These moons are known as Charon, Kix, Kerberos, Styx, and Hydra. The largest of these is Charon which is half of the size of Pluto. This makes it the largest known satellite relative to its parent body. The nearness in Pluto’s and Charon’s size causes them sometimes to be referred to as “The Double Dwarf Planet System”.

Pluto’s landscape is riddled with unearthly wonders, such as its nitrogen “heart” of ice. Found between the Voyager Terra and the Tombaugh Region, the glacier resides over a million square miles. On one side of the glacier is the Sputnik Planitia. The Sputnik Planitia will reorient the entire planet to make itself squarely on the opposite side of the planet as Charon is. This phenomenon is known as polar wandering. The pulling and turning of Pluto of the glacier and Charon are what causes the great vaults on its surface. Also, Pluto contains cryovolcanos. Evidence has been found that slushy cryolava once flowed over certain areas of the surface. Not only does Pluto contain volcanos and glaciers, but dunes as well. Covering an area of 45 miles are hundreds of cosmic dunes. These dunes are thought to be a recently formed addition to Pluto’s topography. The grains which make up these dunes are probably methane-ice carried from the Sputnik glacier by winds.

In 2006, the IAU (International Astronomical Union) reclassed Pluto from a planet to a dwarf planet. This demotion from the ninth planet brought much uproar to the IAU’s surprise. People claimed that it altered history and tradition. The reason for this reclassification came about after the further observance of the cosmic body’s nature. The size of Pluto was not great enough to clear the other astronomical bodies from its flight path, unlike planets due to their gravitational acceleration effect. The inability to exert gravitational dominance over its sphere of movement causes the conclusion to be made against Pluto’s planethood. Pluto is not alone in its position of dwarf-planet though. Four others are known to orbit within our solar system. Ceres is the only dwarf planet in our inner solar system. It is found between Jupiter and Mars. It was the first body discovered in the Giuseppe Piazzi belt and the only dwarf planet in our solar system that isn’t part of the Kuiper Belt. Eris is about the size of Pluto and is covered with ice and rock. Haurmea was given the nicknamed Santa by the discovery team and is also considered one of the fastest known orbiting bodies of our solar system. Lastly is Makemake which is found in the Kuiper Belt and has a moon named MK 2.

In 1906, Percival Lowell proposed the theory for a potential ninth planet in our system due to the galactic bodies of the region possessed odd gravitational qualities. He then began the search for this mysterious object which caused such wakes in the gravitational eclipsing in the far-lands of space. Lowell never discovered the source of his calculations of disturbance. In 1929, the project was resumed at the Lowell Observatory in Flagstaff, Arizona. Clyde W. Tombaugh was assigned to this task. To undertake this, he used a 33-cm telescope fitted with a blink comparator that would take great pictures of the heavens which he was to observe. On February 18th, 1930, Tombaugh, made the discovery of Pluto. The remarkable discovery was affirmed on March 13th, the anniversary of Lowell’s birthday and of William Herschel’s discovery of Uranus.