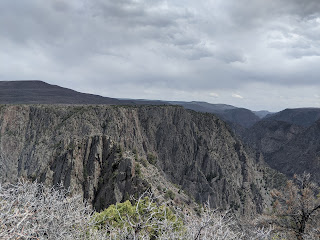 Isn’t it funny how sometimes the best adventures aren’t planned but rather find us? That is how our adventure in Black Canyon of the Gunnison began one warm spring day.

On a recent trip through Colorado, we found that the main road was closed, and wouldn’t be open until 5pm that evening. We were faced with the choice of either going around the closure, adding two hours of driving, or exploring the area of Montrose and the Poverty Mesa. We chose the latter to all our delight because not far from there was the National Park of Black Canyon of the Gunnison.

Black Canyon of the Gunnison National Park is an extremely diverse park, containing activities, that will pique any person’s interest. From the great trail hiking, the geological wonders, the wildlife, canoeing, star gazing, or the rich history, there is so much to see and do.

The canyon cuts 2,722 feet deep into the layers of the geological framework, runs a width of 1,100 feet to 40 feet, and snakes 48 miles from Blue Mesa Dam to Gunnison Gorge. At the base of the massive canyon lay the ever-foaming Gunnison River. The Gunnison is given partial credit for the canyon as it is believed to have eroded it many years ago. Digging down into the soft volcanic rock then deeper still into the metamorphic and igneous stone below. The river is also the lifeblood of the residents of Black Canyon of the Gunnison. The Gunnison Uplift is a dry and temperate high desert that forces the inhabitants of its land to be tough as the stone from which it is wrought. The Gunnison River provides much-needed water access for the various life found in the valley. The Gunnison has also been a means of travel for scientists, explorers, thrill-seekers, and trailblazers. From the river journey of the Stansbury Expedition to the community of East Portal, the river is central.

Surrounding the river are jagged volcanic stones that carry their own significance. The walls are composed of a various array of rocks and minerals. The foundation of the cliffs is made of gneiss and schist. Gneiss is a metamorphic rock that forms due to high pressure; it is tell-tale by the mineral vanes between its dark stone. Schist is another metamorphic rock that sometimes carries crystals of garnet. One thing that cannot be missed when looking at the canyon is the gorgeous colors that line the walls. Minerals and rocks are painted upon the walls with the fine brush of time in the heavy hand of change. Granite filled with feldspar, quartz, and other various minerals mixes with vanes of pink pegmatite to create these steep cliffs. These different rocks can be found in an abundance in and around the park’s premises. For those who look closely, might find a sheet of mica, a monzonite crystal, or the yellow-orange of hematite. On a wider scale, the canyon can be split into three layers. The first and highest layer is of volcanic rocks and ash. Under the volcanically formed layer is a layer of sedimentary stone. Here in the sedimentary layer can be found a pleather of fossilized organisms. Lastly, lay the metamorphic and igneous layer, forged by the pressures and fires from deep within the Earth.

If you can bring yourself to look away from the amazing geology of the canyon, then look up to the sky. Due to the low light pollution, up to 5,000 stars can be seen at night. The dark skies of the Black Canyon are protected by the International Dark-Sky Association as of the year 2015. The IDA protects many other prime viewing skies across the world. The deep skies are preserved by the only necessary use of artificial light, such as motion censored lights and low-impact bulbs throughout the park. The darkness of the skies is measured by a numerical system with the highest rating (darkest sky) being 23 and the lowest rating (brightest sky) being 1. The historical average of the Black Canyon of the Gunnison falls to 21.5l. The park contains many great viewing areas and even areas where you can enjoy the stars from the plates of two skis.

Under the endless skies, whether resting or roused, an abundance of creatures wander. The vertical planes of the canyon offer new dimensions to the lifestyles of its inhabitance. From the mule deer which prowl the rim or the low land otters which play in the crashing river’s wave. The canyon is also home to a devise number of bird species. Jays, falcons, and hawks rule the skies from dawn until dusk. In blissful joy they flap through the free skies, preserved under the protection of God and stewarded by man.

The Black Canyon is a gem of the Western United States. It is hard not to fall in love with the sheer canyons, the lush skies, and the deep waters that the park contains. From my experience, I would advise any by-passers to stop at this amazing park and enjoy the outdoors.