Christmas in Question - Part One: The Christmas Tree 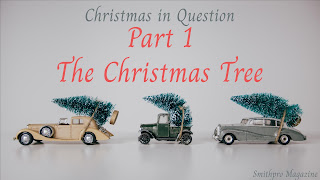 Possibly the most iconic part of Christmas is the evergreen tree in its beautiful shining attire. Many though question the reason for the tree. For Christians, this has been a very big question, as questions of its origin are approached to us.

How should we deal with the giant green elephant in the living room?

The Christmas tree finds its origin in ancient Rome, Egypt, and Germany. These three cultures connected the tree with their religions in different ways.

For the Romans, it was a decoration of their feast of Saturnalia. This feast was in honor of their god of agriculture, Saturn. In Egypt, the primary god of their worship was the sun-god Ra. During this time, it was observed on December 21st and 22nd were the shortest days of the year. The Egyptians believed the trees would please Ra enough for him to give them more daylight. The Celts viewed it as a symbol of never-ending life and to honor their sun god.

The use of the tree for the Catholic Christ Mass began with devoted German Christians who would bring the trees into their homes during the season. This tradition then was brought to America in the 1900s by German settlers in Pennsylvania. The tree was not excepted by Americans for much time, but by the early 1890s, it was beginning to show up in more than just German homes. Today, 25-30 million Christmas trees are sold in America yearly.

Much like the early Americans who were hesitant to accept the Christmas tree due to its pagan history, so are many Christians to this holiday tradition today. While it is true that the tree was inherently pagan, I do not condemn the use of this decoration. For as long as I can remember my family has set up a Christmas tree and it has always brought us much enjoyment during the holiday season. Though this tradition finds its origin in pagan rituals, it never crosses my mind as I help string the lights or top the tree.

Tradition is a repetitive custom that connects the past to the present generations. Therefore, tradition is rooted in the memories of people, and not rather the physical nature of it. If this is so, then the meaning of a tradition can changes if the memory of the people who participate in the custom views it differently than its original meaning. Thus, the meaning of the Christmas tree is determined by the eyes of the beholder. For example, my family is reminded of the cross which Christ died on for us. It helps walk out the story from the manger to the endgame of His resurrection. There is no pagan origin in the tree for us, as this custom is only remembered for Christian reasons.

While the decision is up to the individual, I believe the Christmas tree can be an important reminder for Christians of the reason for the season. Because the whole reason Christ was born was to die on the cross and to rise again in victory. When I look at the tree, I am only reminded of our victory and the fun times my family has had around its boughs.