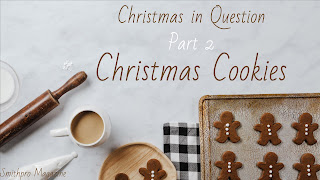 Imagine a fresh wintery scene. Christmas tree in the window, lights glitter brightly from the banisters, a fire radiates warmth, and a distinct smell rises from the kitchen. The aroma of hot sugar cookies, crunchy gingersnap, spicy snickerdoodles, or buttery spritz beacon you to sneak a bite. Maybe it’s the cookie that your family makes every year, or maybe your all-time favorite, maybe they are for Santa, or maybe the start of something new.

The fact is, no matter how many “holiday-scented” candles come out, cookies will always be the smell of Christmas.

Christmas cookies date back to the kitchens of Medieval Europe. During the winter months, due to the ground freezing, people were unable to farm and thus relied mainly upon baked goods. Another reason people began to make cookies for the Christmas season was the expense of sugar and people would save it for the time surrounding Christ Mass. Monks, specifically, helped impress this tradition, as they used the excess spices and such to make cookies.

Even the flavors of our modern Christmas cookies came from medieval populates. The spice trade was blossoming during this era, so the cookies of the time packed a big punch of spicy flavor. Ginger, clove, cinnamon, and all such spices are the highlights of the Christmas cookies then and now because of this.

The Germans were some of the first to claim the tradition of Christmas cookies and the baking of all other holiday treats. It was known as Weihnachtsplätzchen, which literally translates to English as “Christmas cookies.”. Their most renowned treats were Lebkuchen, also known as gingerbread, and Stollen, or sweet bread, and the delightful spritz cookie. In the 1700s, Germans also brought the tradition of sugar cookies into the Christmas scene. Sugar cookies in themselves though have been being made since the 7th century in Persia, but the Germans of Nazareth, Pennsylvania are given the most credit for their creation.

People began to use this Christmas tradition also as a means of teaching generosity and neighborliness. Much like we do now, they would deliver Christmas cookies to the people who lived near them as a show of gratitude and to example of kindness to one another. The popularity of the Christmas cookie surprisingly boomed during the hardship of the Great Depression due to this fact. During this time also the tradition of leaving cookies for Santa on Christmas Eve began. Parents during the Depression would use this to help teach their children to help the needy and to return kindness where it was shown.

Today Christmas cookies are a staple in our holiday traditions. Unlike many other traditions, this one has kept much of its original meaning and appearance. Still, we give treats to our neighbors, leave cookies for Santa, and remember our heritage from these simple sweets. It’s amazing thinking of how something so small can have such a big impact and connect societies around the world.